Do Associate Teams Have a Place in the Cricket World Cup?

4
By Anubhav Roda
6 years ago
In Cricket

The Cricket World Cup 2015 has seen more interesting and invigorating debates referring to the participation of the Associate teams in the following editions than nerve-wrecking games in the edition. While the ICC seems adamant on keeping the Associate nations away, the house of experts seems to be divided on the idea.

The actual falsity lies not in the Associates playing the World Cup against top teams, but the fact that they play them just in the World Cup. So whilst teams would not want to tour or want the Associate nations to tour them to maintain the competitiveness and of course, service the sponsors, it might be a good idea to get the A teams of these countries play against the Associate teams, helping them improve. They can then eventually go on and play the main teams. Or another idea could be that the core of the top teams remains the same with 4-5 new or young players being in the team for these very tours.

This shall not only provide the Associates to gain much needed experience and boost, but also give the young players from top teams to take center-stage.

When the Afghani pace trio of Dawlat Zadran, Hamid Hassan and Shapoor Zadran ran in quick to bowl at 140+; when Kyle Coetzer struck a brilliant 150; when the Irish team got over West Indies; these were things that made a true cricket enthusiast’s heart smile and ponder over the potential of these teams given a good chance. 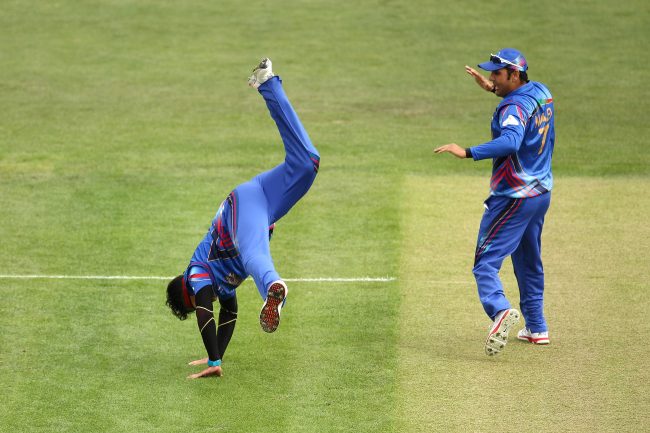 Doing Cartwheels is not the only thing this Afghani bowler can do!

One of the highlights of the World Cup so far has to be Hamid Hassan running in to bowl at Sangakarra, bowling him over and then doing a cartwheel celebration. That certainly brought a smile to all.

The celebration of the Irish and the Afghanis when they beat West Indies and Scotland respectively, was truly heartwarming as well. That was a moment to relish. The Irish fans made their presence felt and were second to none. Aren’t these the kind of spectacles the game wants, which is far from being a global sport?

The Irish can’t be called an ‘Associate’ anymore!

The matches amongst the Associates have been the most entertaining of the lot in this edition and the enthusiasm, spirit and vigor on display, both by the players and the sets of fans is one to savor and one that a cricket fan would like to see in the next editions as well.

Afghanistan ran Sri Lanka close, Zimbabwe were brilliant, so were the Irish giving Pakistan a run for their money to seal a qualification spot. And all this despite lack of match practice against the big teams- got to give credit to them. It’s only imaginable how well these teams could do given regular game time against quality oppositions.

While football is played by 206 nations in the World, Cricket is not even half-way there. ICC at the moment should be looking at taking the sport as wide as possible and not just be sponsor friendly with respect to the matches. They should device methods and modes to make the Associates better and be more competitive from now on (not taking away the competitiveness this time around. I guess this was the time Associates were more competitive than ever and I am mightily impressed).

So, cutting the words short, ICC like a good teacher should, look at strengthening the weaker kids and not ask them not to come over to school from tomorrow!


Too far gone- Young footballers who moved to unknown clubs