They may have the world’s best player, but they haven’t exactly set world football on fire. Here’s a look at Portugal for the upcoming FIFA World Cup.

Portugal have never really been heavyweights in World Football, despite churning out some iconic players across all decades. Their best performance in a World Cup to date was the 3rd place finish in the 1966 edition of the World Cup that was eventually won by England. Their other notable performance was finishing runners-up in the Euro 2004, in which they lost to Greece.

Manager Paulo Bento has named his 23 man squad for the World Cup, with no huge controversies, barring the notable exclusion of Ricardo Quaresma.

Paulo Bento may not have the credentials of a very successful coach that most of his colleagues in the tournament would have, but his skills as a manager are undeniable. Having taken over Carlos Quieroz’s disaster Euro 2012 qualifying campaign, he not only got them to qualify, but also got the team to do well in the tournament as well. Though they are in a moderately tough group, they would be expected to qualify. How far they go from there would be a test of Bento’s skill as much as the players.

This is perhaps the easiest pick in the entire team. Cristiano Ronaldo is the World’s best player and not only does he have a Ballon d’Or to prove it, he also has the goals and performances for his club to back him up. But unless he wins a major international tournament, the chances of him being talked about in the same vein as some of the greats of the game would be less.

The defence is seen as a weakness for Portugal and Pepe will be the go-to guy if the team has to have any chance of stopping opponents from scoring. He will need to curtail his penchant for committing rash fouls, often to the detriment of his team. If he can put it together and organise the defence, Portugal will have a very good chance in the tournament. 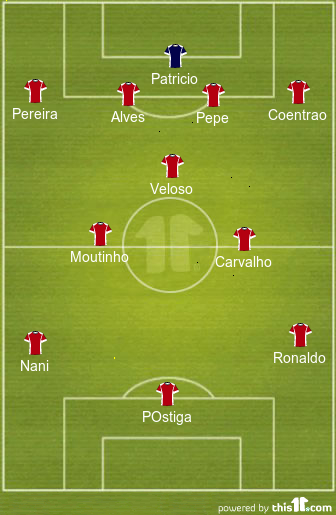 It is expected that Portugal will play in a 4-3-3 formation, with Ronaldo leading the attack while Nani and Vierinha occupying the wings. However, while this may be an attacking formation on the outset, Bento is known to play defensive football, and so the onus will lie on the players on the field to make something happen. But the fans will certainly hope that Bento goes for more attacking football to make use of the talent he has in the attack and midfield.

For Portugal, their greatest strength obviously lies in the attacking part of the team, with a world class striker leading the line. But the likes of Nani and Moutinho need to get in the act and provide able support if they are to go far in the knockout rounds. Their main problem area would be in the defence, with Pepe and Alves likely to start. Though Bento likes to play defensive most of the time, the defending has not always helped the manager’s or the team’s cause and if they are not disciplined in the tournament, it will certainly hurt their chances.

While the chances of them topping the group are very slim, with that spot likely to go to Germany, they would be expected to beat the likes of Ghana and the United States. It will certainly not be an easy proposition, but with Cristiano Ronaldo in the team, you would expect Portugal to reach at least the quarterfinals.


Bookworm. Arsenal Addict. Compulsive theorist. I have an opinion on almost everything. The only religion I follow is the gospel of Dennis Bergkamp.