The Albicelestes are placed in Group F with Bosnia and Herzegovina, Iran and Nigeria. The Argentines have a really formidable attack line and are expected to top the group with ease.

Alejandro Sabella was appointed head coach of Argentina after the 2011 Copa America and has since then done a decent job. Since taking over he has a win percentage of 59.38% winning 19 of the 32 games in charge. He has previously won the Copa Libertadores 2009 and Argentine Primera División: 2010 Apertura with Estudiantes. He has done well with the Argentine national team qualifying for the World Cup as table toppers winning 9 games and losing just 2. And with the attackline he has at his disposal, his team is expected to do well in Brazil.

Argentina has reached the World Cup finals in four occassions winning it twice, beating the Netherlands 3–1 in 1978. They won again in 1986, a 3–2 victory over West Germany, single-handedly led by Diego Maradona. That World Cup was famous for Maradona’s Hand of God goal against England in the quarter finals. Their most recent World Cup final was in 1990, which they lost 1–0 to Germany by a much disputed penalty. They also appeared in the first ever World Cup final in 1930 where they lost to Uruguay. Last few World Cups have been dissappointing for them as they could not qualify from the group stages in 2002 and managed to reach upto the quarter finals in both 2006 and 2010.

Players to look out for:

Lionel Messi: Considered one of the best players in the world, he is the captain of the team. A lot will depend on this little magician if Argentina are to do something. Many would argue that the Barcelona number 10 had a quite season by his standards, but it has often been the case with great players, bigger occasions have often brought out the best in them. And to be fair to Messi, he is just the right kind of player you might expect to script history every time he turns out to play.

Sergio Aguero: The baby faced assassin. He can outrun defenders with his pace and has one of the most lethal finishes. And he has been in good form this season for Manchester City. The former Atletico frontman missed a chunk of the second half of the season through injury but still managed to grab 23 goals from 26 starts and was one of the prime reasons why they were in a title contending place towards the fag end of the season.

Argentina have an able backup to Messi in Di Maria

Angel Di Maria: The Real Madrid winger is agile, has a truckload of skill and can deliver extremely accurate crosses. Di Maria was a standout performer for the Los Blancos during the UEFA Champions League triumph last week having created the second and winning goal for the side.

They generally go with a 4-3-3 formation because of their highly famed attackline comprising of Aguero, Lavezzi, Messi, Higuain. 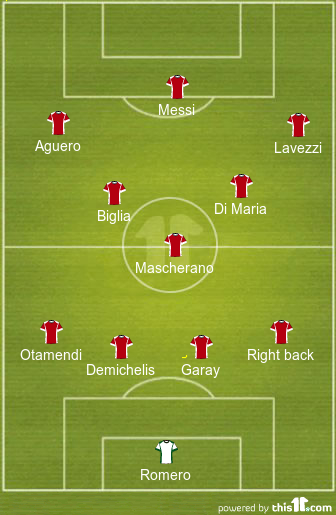 The strength of the team is obviously the attack. With names like Aguero, Higuain, Lavezzi, Messi, Di Maria, Argentina has the most prolific attack in this tournament. However the defense is the main weakness. Nicolas Otamendi, Martin Demichelis are a bit inconsistent although Ezequiel Garay has been good for Benfica though. Lack of quality goalkeeers is a point of concern however. Pablo Zabaleta at right back is definitely a strong point because the Manchester City man has been excellent throughout the season.

A quarter final finish is not what the fans would like, but if they have to go further they need to perform really well. If the defense can keep its shape, the attack has the strength to destroy any defense on its day.


Bodyline: The Greatest Cricketing Strategy Ever? Or The Ugliest?