As another week of the FIFA World Cup 2014 draws to a close, we are treated with surprises galore. From debatable refereeing decisions to stellar individual performances, we came across some major surprises and some expected results.

With majority of Spanish stars failing to perform, the defending champions suffered an unprecedented 2-0 defeat against Chile after succumbing 5-1 to Netherland in Game Week 1. Porous defensively and blunt in the attack, the masters of the passing game lost out on their midfield prowess as well. As a result, the blitzkrieg counter attacking football utilized magnificently by the Chileans tore through Spain’s frail defensive barricade. 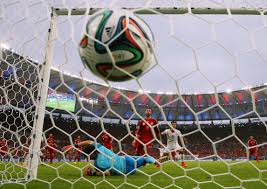 Del Bosque had to make a few changes to the starting XI after the thrashing in GameWeek1. Javi Martinez, whose usual position on the field is in the deep midfield, was chosen over Gerrard Pique in the defence beside Sergio Ramos and Pedro was brought in to assist Diego Costa while Xavi was benched. But as a ship with a hole sinks no matter how much we try to pump the water out, the hole in the Spanish tactics was their beautiful game. Xabi Alonso and Diego Costa were absolute duds as both of them failed to have any impact whether defensively or in the attack.

Spain’s slow passing build up was most often, appropriate to say, being overrun by the Chileans. Football critiques termed this the end of an era and supposedly the end of the beautiful tiki-taka.

Every English contingent is always laden with huge expectations and why not? The EPL is termed as the most competitive league in all of Europe but the National team suffers as none of the players play abroad in other leagues and English fans have been subjected to another disappointing competitive tournament run.

It can be said that England fell short rather than calling them failures which  is even more alarming. They were again the losing side in a match which yielded a 2-1 score line against the Uruguayans. Although Wayne Rooney scored his elusive World Cup goal, yet a lot of the previous chances went begging for better finishing. Sterling and Sturridge were both ineffective as both of them were effectively marked out of the game. The irony of the match result was probably Luis Suarez’s(who plays at Liverpool) goals, both of which were brilliant individual efforts as Steven Gerrard seemed to have lost track of which side he was on as a failed clearance attempt by him placed the ball at the Liverpool marksman’s feet. England should have been nothing less than brilliant but Roy Hodgson’s decision of leaving out John Terry, Ashley Cole and keeping Frank Lampard benched might have been one of his greatest mistakes.

Home team Brazil were expected to win every match in their group given their attacking prowess and depth in the team. But Mexico goal keeper Guillermo Ochoa was literally a wall and Brazil were denied scoring time after time. Ochoa jumped and leaped putting his body on the line to maintain his second clean sheet of the group stage. If Mexico are to qualify, Ochoa will have to show the same form in the last and decider game against Croatia.

Brazil on the other hand failed to show the spark that makes them a pioneer of the game. The Neymars and the Paulinho’s failed to clinch winners and as a result Brazilian coach Scolari had to push more men upfield. David Luiz, Dani Alves and Marcelo were all playing at the midfield with only Thiago Silva behind them.

If Brazil are to lift the Cup they have show the form they displayed in the Confederations Cup finale against Spain last year.

Back to back victories over Uruguay and Italy and lo! Costa Rica tops group of death. A 3-1 win against Uruguay and 1-0 win against Italy helped this North American side to become one of the first teams to advance to the round of 16. Having won only one of their six friendlies, the side seemed to have taken the losses seriously. The Costa Ricans played as a team with a note able performance put in by Joel Campbell in both matches.

They shook off their opening game jitters and loss to home team Brazil to blow away Cameroon in a 4-0 rout. Mario Mandzukic who might leave Bayern Munich scored a brace. Croatia’s hopes of qualification now depends on their last game against Mexico and what makes is interesting is the fact that Mexico’s qualification hopes rest on this last group stage game too. Game Week 3 will see both the qualification contenders go all out to secure their berth.

An attacking display from the French saw them acquire an unassailable 5-0 lead over a disorganized Swiss squad. Although by the end of the game the Swiss had reduced the deficit to 5-2 but the Swiss goals came a little too late. As the French cut through the Swiss defence with sheer speed and brilliance like a knife through Swiss cheese, it felt as if a fresh French squad has risen out of the ashes of last World Cup’s debacle.

Valbuena has not allowed France to miss Ribery

Karim Benzema has been on sensational form since Game Week 1.From scoring a brace against Honduras and missing out on a hattrick(missed penalty and goal ruled out at the end) against Switzerland, he has been at the heart of every attack that France had launched. Assisted by Olivier Giroud, Mathieu Valbuena, Blaise Matuidi and Moussa Sissoka, Benzema went onto score while assisting one goal and missing a penalty previously. This French squad is balanced with quality defenders, classy midfielder and sharp forwards who are enjoying great form at the moment.

If France can attack so well against other bigger European names, then France might be one of the two teams appearing in the finals.

Ghana puts in an inspired performance

After losing 2-1 against USA in Game Week 1, Ghana bounced back to keep their World Cup hopes alive with a 2-2 draw against Germany, one of the strongest contenders for the World Cup. Kevin Prince Boateng(Ghana) and Jerome Boateng(Germany) his half brother were both substituted out at the end of the first half and that is probably the point when the real game began.

Boye with another crunching tackle on Muller

Germany’s flawless attacks with Muller, Gotze, Lahm and Ozil were repeatedly blocked off by the Ghana’s defensive duo of Jonathan Mensah and John Boye. As expected the Germans took the lead off Gotze whose goal seemed to have a tad bit of lucky escape. But then Ghana hit back with an Andrew Ayew header and then a Asamoah Gyan power shot. As Andrew Ayew urged fans, the stadium erupted with the locals cheering for Ghana. German supporters were left aghast when the legendary Miroslav Klose scored his record 15th World Cup goal to draw his side level and equal Ronaldo’s longstanding World Cup record.

Ghana had a few more chances but they went begging if only better decisions were taken by the players. Not only did Ghana win a lot of fans but it proved that even the Germans are not unstoppable. They will provide inspiration to other African nations.

Some noteworthy goals of Game Week 2:

2)    Gervinho’s goal against Colombia was another moment of individual brilliance.

3)    Iran defended brilliantly against Argentina until Lionel Messi swerved a shot in the dying moments of the game to secure Argentina’s victory.

With the end of Game Week 2 we have once  again been treated to some beautiful football. Some big names have faced unprecedented losses against smaller names. The World Cup is an open tournament now.

Top 10 goals in the World Cup so far!