Game week 3 of the FIFA World Cup has ended and it has been a major reason for delight for true football fans across the nations. Supporters of some major football playing nations like England, Italy, Spain and Portugal among others were let down as their national teams crashed out of the ongoing FIFA World Cup’14 in Brazil. As weaker teams on paper fight it out against stronger teams, not only did we come across some goal-for-goal style football but also numerous individual battles on the field.

Brazil through to the Quarters

Game Week 3 included the first match of the knockout stages between Brazil and Chile and as expected it went on to become a cracker of a match. David Luiz scored off a set piece to get Brazil into the driving seat but the wily Chileans soon found their way through one of the costliest defensive line ups in the World Cup as Alexis Sanchez went on to celebrate the equalizer. Many more chances went Brazil’s way but none were converted successfully. The game in the second half was dominated by the Chileans as the Brazilian midfield and the defence seemed to be leaky but for Julio Cesar’s fantastic save that denied the Chileans. The Chileans were greatly unlucky when Mauricio Pinilla’s shot ricocheted off the post.

The match went on to the penalties and Chile crumbled under pressure as they missed three penalties; two were blocked by Julio Cesar and the third was blocked by the post. Jorge Sampaoli’s expectations from the team might not have been fulfilled but he has surely given the Chileans a new direction to walk towards.

In their last group match, Argentina decided to take it to the line to secure their victory. Nigerian striker found spaces twice through the Argentine defence to draw level every time Messi scored. The decisive goal for Argentina came via a Marcos Rojo header from a corner.

Curl it as you wish. Messi scorea against Nigeria. (GIF via @FlyByKnite)

Messia displayed some sensational form both during normal game play and with the curling free kicks that left the Nigerian defence in a frenzy. Angel Di Maria showed some great form as well with some cracking shots from outside the penalty box most of which were on target and flew with so much power that Nigerian goalkeeper Enyeama can only punch them away to safety. Both Argentina and Nigeria have progressed into the knockout stages.

Just like Costa Rica, this is the first time Algeria has qualified for the knockout stages. Not much was expected from this team but they qualified as the second team from Group H for the round of 16 defeating Korea Republic and a draw against Russia. They will face Germany in the knockout stage and Algerian fans around the world would expect a repeat performance of the 1982 draw against West Germany.

Italy played according to their own gameplans but a red card to Marchisio sent their plans tumbling. Besides the red card, a Uruguayan corner got converted into a goal by Diego Godin and Andrea Pirlo had to push further upfield to create chances or score a goal himself. But the Uruguayan defence refused to yield to Ballotelli, Immobile or even those cheeky Pirlo passes. Cassano was brought in during the dying moments of the game but the Italians had given up hope by then.

Luis Suarez failed to get on the score sheet for his country due to some heavy marking by Chiellini and Suarez resorted to bite Chiellini to keep him away; the bite left something sort of a hickey on Chiellini’s shoulder. Since according to FIFA biting is placed above rash tackles and broken legs or life threatening kicks to the chest, Suarez has been banned for 9 internationals and will not even be allowed entry to stadiums. Although Suarez has been in great form for Liverpool and against Uruguay’s last game against England, this biting incident has been his third such offence. For a player of his stature it is something very close to utter stupidity on his part. We all wonder if FIFA should have ordered for some expert counseling for the marksman as well.

Spain managed to secure a dominating win against the Australians(who failed to win any of their group games) but the win came a little too late. Somehow the starting XI for this game seemed to have been better equipped than those employed by Del Bosque in the previous two matches. 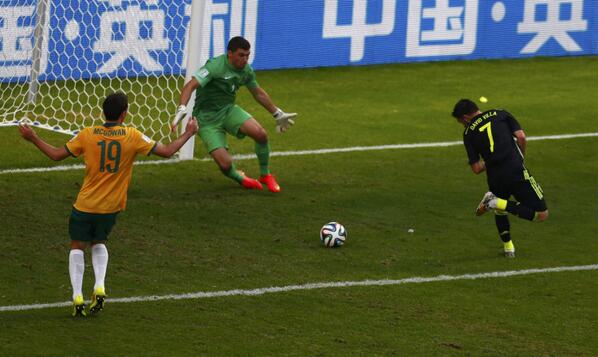 David Villa spear headed the Spanish attack and he scored a beauty of a goal swiftly turning the ball with the inside of his right foot between his legs instead of taking a more direct approach to the shot. After being substituted by Torres, Villa broke down in tears as the leading Spanish goal scorer with 7 goals in World Cups finals literally played his last international match. Del Bosque will miss the services of Villa(whom he should have utilized very early on in the tournament) from the next qualifiers.

Costa Rica have proved that they deserve to top the group of death. They have convincingly defeated Uruguay, won against Italy and held on to draw against England. As for England and all their football pride, their contingent were to fly back home after ending the group stages without a single win. Many fans might call for Roy Hodgson to quit but he might have other plans.

They ended up at the bottom of their group as Germany and USA qualified for the knockout stages but the Black Stars won a lot of hearts. Even against Portugal they showed a major display of team spirit and a hunger to win. Muntari and Boateng didn’t feature in their final clash against Portugal but even then the Portugese had a hard enough time to score until Cristiano Ronaldo converted a weak clearence by Fatau Dauda.

CR7 fans across the world were let down by his individual performance. While many expected a lot of flair and a one man show that would help Portugal win matches, Cristiano Ronaldo sporting a knee injury failed to live upto the expectations. Hence, he was harshly criticized and at times rightly so while many failed to see his dedication towards his nation. While doctors advised him to stay off the pitch, he made sure that he would help his team as much as he could. Ronaldo seemed unfit and without the likes of Bale or Benzema he flopped.